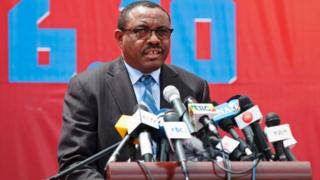 Ethiopian Prime Minister Hailemariam Desalegn has resigned unexpectedly, saying he hoped to end years of unrest and political upheaval.
In a televised address, he said his resignation was "vital in the bid to carry out reforms that would lead to sustainable peace and democracy".
Mr Hailemariam, who has led the country since 2012, also stepped down as chairman of the ruling coalition.
Hundreds of people have died in three years of anti-government protests.
Demonstrations first spread across the country in 2015 amid calls for political and economic reform and an end to state corruption.