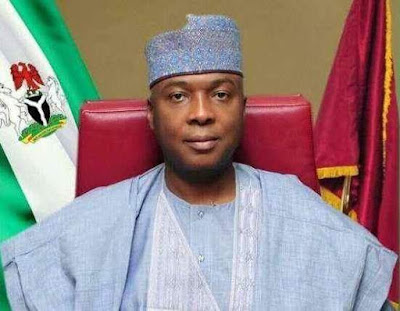 Despite the inability of the home-based Super Eagles to lift the 2018 African Nations Championship (CHAN) cup, the President of the Senate, Dr. Abubakar Bukola Saraki, on Monday, applauded the lads for playing in the finals of the championship held in Morocco.

Saraki, in a statement signed by his Media Office, stated that all Nigerians will remain proud of their performance in Morocco even though the boys failed to convert their numerous chances during the game against the Atlas Lions of Morocco in Casablanca on Sunday.

He stated that even though the expected victory eluded the country, the home based Eagles in particular and the country in general has a lot to learn from the experience.

“The whole nation is proud of the level of success recorded by our players and their coaching staff during the just concluded CHAN," Saraki said. "I believe that with early preparations, focus and determination, the team and its handlers can bounce back from this setback to rule the continent in future competitions."

He reiterated the commitment of the 8th Senate in particular and the National Assembly in general, to prioritise sports development in the country through necessary legislation, advocacy and timely oversight duties to ensure that funds appropriated for sports' development are transparently utilized by the respective agencies.