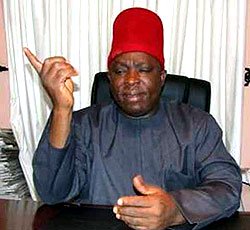 Chief Victor Umeh of the All Progressive Grand Alliance (APGA) has won the Anambra Central Senatiorial rerun election.
The election took place in seven local government areas of Anambra: Njikoka, Awka North, Idemili South, Dunukofia, Awka South, Anaocha and Idemili North.
APGA won in the seven council areas in the result announced by the Independent National Electoral Commission(INEC) early Sunday morning.
The result showed that in Njikoka, APGA got 11, 506 votes while All Progressive Congress (APC) got 158.
In Awka North, APGA and APC scored 7,572 and 81 votes respectively while in Idemili South, APGA garnered 4,647 votes against APC’s 104 votes.
Also in Dunukofia APGA scored 7, 307 votes while the APC got 124.
APGA also swept Awka South with 12,384 votes against its closest rival APC which got 231 votes, while in Anaocha council area, APGA and APC got 12, 245 votes and 120 votes respectively.
In Idemili North, APGA won with 9,218 votes.
Announcing the result, Prof. Charles Esimone, the Returning Officer, said Umeh having scored the highest number of votes with 64, 878, was the winner of the contest and returned elected.
Esimone, who is Deputy Vice Chancellor Academic, Nnamdi Azikiwe University Awka, said the number of registered voters in the seven local government areas were 745, 828 out of which 67, 872 were accredited.
“I, Prof. Charles Esimone certify that I am the Returning Officer for the Anambra Central Senatiorial rerun election.
“I hereby declare that Chief Victor Umeh, having satisfied the conditions of the election and scored the highest number of votes, is declared winner and returned elected,” he said.
The APC, with Sen. Chris Ngige as candidate, was second with 975 votes while Progressive Peoples Alliance (PPA) came third with 116 votes.
Other parties that got votes were the Mega Progressive Peoples Party (MPPP), 111 votes; Labour Party (LP), 95; National Conscience Party (NCP), 72; Alliance for Democratic Congress (ADC), 57; United Progressives Party (UPP), 55; Green Party of Nigeria (GPN), 48 and Action Congress for Democrats (ACD), 33.
The News Agency of Nigeria (NAN) reported that votes were cancelled in four polling units in Awka South where there were cases of over voting and in Agulu, Anaocha council where people where accredited manually.
Also in Idemili South, over voting was recorded in two units.
Earlier, Dr Nkwachukwu Orji, Resident Electoral Commissioner of INEC in Anambra, thanked all stakeholders including the electorate, poll officials, observers and journalists for contributing to the success and peaceful conduct of the election.