Trump's View Of Africa Is Not What WNBA's Chinenye Ogwumike Sees 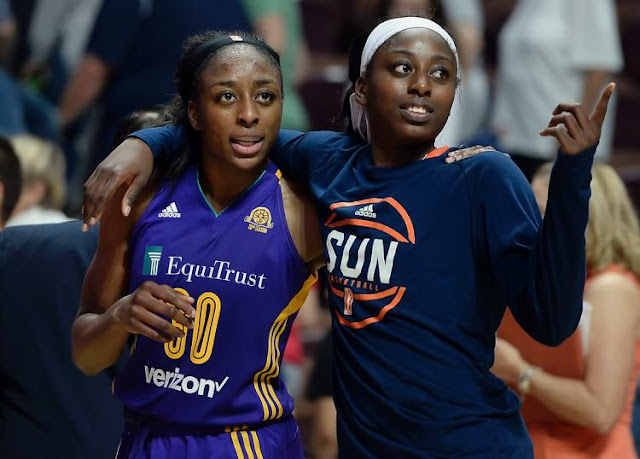 Chinenye Ogwumike thinks of herself as the underachiever in the family. And she’s only partially kidding.
The Ogwumikes of Houston, Texas are the embodiment of the American dream. It’s a dream that began decades ago in Nigeria, the homeland of parents Peter and Ify. Their oldest daughter, Nneka, is the Stanford educated former WNBA top overall pick, MVP and champion. The two youngest daughters, Olivia, 21 and Erica, 19, both play basketball at Rice University where they are pre-med students.
“Yes, I’m the underachiever,” Chinenye, or Chiney as she is called, says with a laugh. “I have Nigerian parents. They expect more.”
Chiney, 25, makes her living playing and talking basketball but her true passions are family and Africa, a continent close to her heart that is nothing like what President Trump called it last week.
“It is a beautiful place,” Chiney says over the telephone.
She politely declined to respond to the president’s comments disparaging immigrants from Africa and Haiti. The pain, however, did hit close to her heart.
“This has been crazy the last few days,” she added. “I haven’t spoken to my parents about it because I don’t need to. I know what my family stands for.
“My parents always told us whatever you’re doing do it to the best of your ability. We don’t allow basketball to define us. It doesn’t define me. Basketball is a bonus.
“I want to give back. My parents don’t want us to be consumed by politics and things we can’t control. They just want us to use our platform.”
Chiney, of course, is anything but an underachiever. She also graduated from Stanford and currently plays for the Connecticut Sun of the WNBA. The team’s close proximity to Bristol afforded Chiney the opportunity to already launch her broadcasting career at ESPN.
She serves as an anchor for SporstCenter Africa and was in Toronto this week to working as an analyst for the G-League Showcase. She called back-to-back games on Friday and the workload got the best of her voice. But the emotion in her words is powerful when she talks about Africa in the aftermath of the President’s derisive comments.
“My grandfather is the patriarch of his village,” she says. “And when I say village I don’t mean people living in huts. It’s a small town with a university and well respected families.”
Both parents were raised in affluent households but from different regions of Nigeria. Peter grew up in the rural Nigeria while Ify was “cosmopolitan girl” from Lagos, the country’s largest city.
Peter and Ify met during their college days at Weber State in Utah, eventually married and moved to Houston when Peter landed a job at Compaq. Houston has a large Nigerian community or as it’s called “little Naija.” The most famous Nigerian in Houston is Hall of Fame center Hakeem Olajuwon.
Ify wanted to attend law school but plans changed when the couple started a family. Still, Ify had time to earn her master’s degree and is currently working on a PhD in Education while serving as the assistant superintendent of Cypress-Fairbanks Independent School District.
“My father started his own business in Nigeria to help companies upgrade to technology,” Chiney said. “We’re always trying to find ways to give back.”
Chiney talked about “brain drain” a concept where there is a mass exodus of intelligent people who leave Africa to become educated in maybe London or the United State and never return.
“That hinders Africa’s ability to create change,” Chiney said. “But there is a new generation of kids, people of my age, who are interested in the heritage and culture of where they came from. I was born in the United States. But Africa is a big part of me.
“Africans were always trying to assimilate. But now being different is very unique. My generation is interested in going back to Africa and not allowing our family lineage to be cut off.”
Chiney is involved in several charities to improve life in Africa. She visited the slums of Kenya to introduce a program designed to give disadvantaged girls access to education. She helped start a 10-team high school basketball league in Nigeria. She’s worked clinics in Rwanda, the Junior NBA in Kenya and attended the NBA Africa Game last August in Johannesburg.
She visits Africa at least twice a year and knows her next trip will be unlike any other.
“I’ve always considered myself a Nigerian, a scholar, a woman and a basketball player,” Chiney said. “I’m proud of that.”