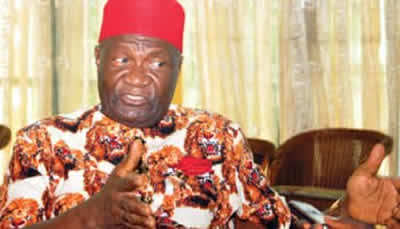 Leaders of the South -East and South -West, on Thursday in Enugu, asked the Federal Government to declare Fulani herdsmen as terrorists.
The Southern leaders, at an event tagged, ‘Handshake Across the Niger: A Celebration of Igbo / Yoruba Friendship Beyond Brotherhood,’ and organised by a pan -Igbo group, Nzuko Umunna, also insisted on the restructuring of the country.
The event, hosted by the leaders of Afenifere and the Ohanaeze Ndigbo, was also attended by the representatives of the South -South and the Middle Belt.
A minute silence was observed in honour of the victims of herdsmen attacks in Benue State and other parts of the country.
Speaking at the event, the leader of the South -West delegation and representative of the chairman of Afenifere, Chief Ayo Adebanjo, faulted President Muhammadu Buhari for the Federal Government's refusal to declare the herdsmen as terrorists, as was done to the outlawed Indigenous People of Biafra.
Adebanjo also expressed anger at Buhari ’s opposition to restructuring, which he insisted was the only solution to the country ’s problems.
He described Buhari as the “ problem ” of Nigeria due to his (Buhari ’s) refusal to heed the calls for restructuring.
Adebanjo said , “It is only restructuring that can guarantee your rights in Nigeria. Cheating, injustice and even corruption can only be wiped out through restructuring.
“President Buhari will not do that; instead he has ensured that all military and para - military institutions are under his control, and he has refused to name herdsmen as terrorists yet he pounced on IPOB that seeks for justice.
“Buhari is the problem of Nigeria by opposing restructuring. We will achieve it if we are united. Igbo, Yoruba mutual suspicion is a thing of the past. We are not looking at the past. We are looking at the future.
“Buhari will not agree to restructuring because his people are the beneficiaries of a lopsided Nigeria. We are in a serious situation.
“If you go to election without restructuring, you are done for. We are not ganging up. Let us come together on the terms agreed by Nigeria ’s late founding fathers like Nnamdi Azikiwe, Obafemi Awolowo and the Sardauna of Sokoto in the 1950s.
“If we don ’t restructure now, we are gone. Look at what is happening in Benue. You are in power for two years and you don't know these people exist. Now, you are sending committee. You keep saying , ‘ I will arrest them .’ The man going after them was the same man that said it was a communal clash. How is it a communal clash ? Are they indigenes of Benue State? We should consolidate this unity; the South- East, South- West unity is sine qua non to a peaceful, united Nigeria ,” Adebanjo said.
He equally took a swipe at Vice -President Yemi Osinbajo for trying to “preach” one Nigeria to him.
He said , “ We had one united Nigeria before he ( Osinbajo) was born. I and his father were Awolowo’s followers. Let us look at what we are doing. If we want to stay together, let us do restructuring.”
On his part, the leader of the South -East delegation and President General of Ohanaeze Ndigbo , Chief Nnia Nwodo, noted that it was “unfortunate ” that the Federal Government had not proscribed the herdsmen and declared them as terrorists.
Also insisting on restructuring , Nwodo said , “Every credible analysis shows that unless we devolve powers to the states and allow them the control of their natural resources and basic utilities of powers, environment, education and infrastructure development, Nigeria will collapse.”
Speaking on the need for Igbo / Yoruba brotherhood, he said , “Today , we have come to say thank you to the Fajuyi family for paying the highest price of solidarity and brotherhood to the Ironsi family and by implication to Ndigbo .
“The late Colonel Adekunle Fajuyi , in offering to go along with his boss and guest rather than leave him alone to be slaughtered, was dramatising brotherhood. We will be betraying him and his legacy if we do not continue to promote that brotherhood. ”