Proceedings In The Nigerian Senate On Wednesday, 17th January 2018 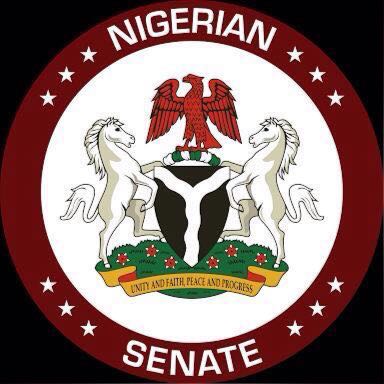 Welcome to a new Legislative Day in the Senate of the Federal Republic of Nigeria!

Senate President, Dr. Abubakar Bukola Saraki, led the Principal Officers into the chambers; took the official prayers; and began the day’s proceedings at 10.41am.

*PETITIONS*
Senator Aliyu Sabi raised a petition on behalf of a member of his constituency on wrongful dismissal by the Nigerian Police.

Senate President, Dr. Abubakar Bukola Saraki referred the petitions to the Committee on Ethics, Privileges and Public Petitions to report back in 2 weeks.

*POINT OF ORDER*
Senator Emmanuel Bwacha cited Order 43 and spoke on the gruesome murder of a Member of Taraba State House of Assembly, Barrister Hosea Ibi on 30th December , 2017 by unknown gunmen.

“It seems Nigeria is becoming a lawless country where lawlessness has no consequences. If the security cannot do their jobs then the leadership should be questioned and changed”.- Senator Ben Murray Bruce.

Senator Kabir Marafa cited Order 14 and said: “ I received a call from my hometown that members of my constituency were kidnapped by unknown militia who are threatening to kill them unless they pay a ransom.”

“Foreigners are afraid to come and invest in Nigeria because of these multiple killings all around the Country, in some parts people are killed and eaten”.- Deputy Senate President, Ike Ekweremadu.

“So many security-related appointments in this country are unmerited... They are not performing their basic duties of protecting lives and properties." -Senator Isah Misau.

“Distinguished Senators every contribution should be a long-lasting solution to these security issues. Right now, we need to look into solutions and the way forward.”- Senate President, Dr. Abubakar Bukola Saraki.

*Senate resolved to:*
-Call on the Senate to send a high power delegation in conjunction with the State Government to find a long lasting solution to the problem,
-Direct the National Emergency Management Agency (NEMA) as a matter of urgency to release relief materials,
-Urge the Federal Government to deploy more security forces in the affected areas; Army, Police,  Department of State Services (DSS) and Civil Defense,
-Urge Federal Government to mount a comprehensive surveillance on the Taraba- Adamawa border to deter future occurrences.

Deputy Senate President, Ike Ekweremadu adds a prayer that Senate should suspend plenary Wednesday and Thursday next week for a National Security Summit.

*PRESENTATION AND CONSIDERATION OF A REPORT*
1. Report of the Committee on Downstream Petroleum on the Investigation of the Lingering Premium Motor Spirit (Fuel) Crisis across the Country by Senator Kabir Marafa.

“I sincerely commend Senate President, Dr. Abubakar Bukola Saraki who rose up to the occasion to get off recess and mandated the Committee on Downstream Petroleum to address this fuel scarcity. I don’t think this report meets the requirements”.- Senator Atai Aidoko.

“Fuel scarcity has become a reoccurring dilemma, I suggest we set aside this report and properly debate on it. It’s unfair and a bad report”.- Senator Stella Oduah.

“I commend Senate President, Dr. Abubakar Bukola Saraki for the step taken during the recess as regards the fuel scarcity... Hundreds of millions of dollars have been used in the oil sector that have not been appropriated for”.-Senator Dino Melaye.

“There’s fraud in NNPC, Ministry of Finance that needs to be investigated. We need a full blown investigative hearing because they are syphoning Nigeria’s money”.- Senator Adeola Solomon.

"I sincerely commend Senate President, Dr. Abubakar Bukola Saraki’s efforts on the fuel scarcity situation. The Chairman of the Committee on Petroleum Downstream should withdraw his report, as it doesn't meet the requirements."- Senator Godswill Akpabio.

"I support the Motion of investigating what has happened in the oil sector. We must ensure that no penny is used by the oil and gas sector that has not been appropriated by National Assembly." -Senate Leader

“In the seventh senate, this issue of fuel subsidy is a topic that I spent a lot of time on. It was my Motion that brought this topic to the national discourse. So, it is something that I can speak on.”- Senate President, Dr. Abubakar Bukola Saraki.

“There are three issues here that we need to separate: even as we speak now, there are still queues. The issue of the ongoing scarcity is one problem that the Committee needs to go back to look into so that Nigerians can be reassured that this will not reoccur. Problem number two is that the subsidy is important, however, based on the figures that have been presented, it is clear that there is a bigger fraud that is being perpetrated. This is because the amount of PMS that is allegedly coming into Nigeria cannot be consumed by Nigerians. At the end of the day, it is Nigerians that are paying for this subsidy fraud because it is not transparent, and it is only being run by one organization.”- Senate President, Dr. Abubakar Bukola Saraki.

“At the end of the day, it is Nigerians that are paying for this subsidy fraud because it is not transparent, and it is only being run by one organization. The third problem deals with the principle of MDAs incurring expenditures without approval by the legislature.”-Senate President, Dr. Abubakar Bukola Saraki.

“Therefore, in order to get to the bottom of these pressing issues, we will be to break up the issues.
The issue of the subsidy and how it came about; as well as the issue of the scarcity that is still ongoing and the fraud of the volumes will go back to the Downstream Committee for a more comprehensive report.While the issue of unauthorized spending in the sector will be looked into by the Public Accounts Committee.”-Senate President, Dr. Abubakar Bukola Saraki.

*ADJOURNMENT*
Senate Leader moved that all other items on the order paper be stood down to another Legislative day. Minority Leader seconded.

*Signed:*
New Media Department,
Office of the President of the Senate,
Federal Republic of Nigeria.