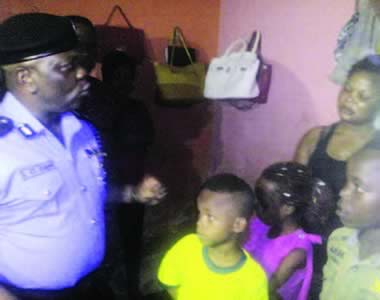 No fewer than six children between the ages of three and 10 have been rescued from a suspected human trafficking transit camp in the Ejigbo area of Lagos State.
The owner of the camp, 25 - year -old Comfort Anwana was arrested on Tuesday during a raid carried out by operatives of the state police command and the Ministry of Youths and Social Services.
Her siblings, Gift, 28 ; and 23 - year -old Blessing, who stayed with her, were also apprehended. They all hail from the Oron Local Government Area, Akwa Ibom State .
Reports say the team stormed the one -room apartment camp following a report from some residents of the area that Anwana illegally took custody of the children.
The state Commissioner of Police , Edgal Imohimi, who led the operation, noted that the camp was not an orphanage.
He said how Anwana came about the children was shrouded in mystery, adding that the command would carry out an investigation to unravel the actual activities of the centre.
Imohimi said , “We are concerned about the children’ s welfare. First of all, we must ascertain how they got into Comfort’ s ( Anwana ’s) custody. We must ascertain what happened to them while here. Were they abused, sold into slavery or sold as domestic helps? This is not an orphanage or a day care centre. We want to know where she got the children from because we are concerned generally about child abuse.”
The CP, who said the arrest was the result of community policing in Lagos State, directed policemen at the Gender Unit of the command to work with officials of the Ministry of Youths and Social Development to ensure that the children were taken to a home pending the outcome of the investigation.
However, Anwana, said the children were her nephews and nieces, adding that their fathers were dead.
She said she helped their mothers to look after them, adding that the parents visited them occasionally.
She said , “Two of the children are my immediate elder sister ’s children, three are my eldest sister ’s children whose father was a policeman, while one of them is my child.
“My eldest sister ’s place of work is far, so, she leaves them in my care and checks on them occasionally.
“I work in a company as a contract staff member and run shifts. I buy foodstuffs in bulk for the children with my salary. I rented the apartment. I wanted to move with them to a two- bedroomed apartment soon. Their fathers are dead, but they still have mothers. They are all schooling here. ”
A police officer said when the children were interviewed, they could not mention their surnames, adding that some of them could not mention their mothers’ names .
“The eldest of them, Lawrence, 10 , didn ’t know his father ’s name. He said his mother took him to the camp and that she comes to check on him once in a while. He could not say what his mother does for a living.
“Another child, Michael, nine, said his mother was a food vendor at Mile 12 and sometimes visited him. Eight - year -old Fabian could not mention his parents' names, while Felicia, 7, who said she had been in the apartment for long, stated that she did not know where her mother lives.
“One of the children, a three - year -old boy , sustained an injury , while another girl of the same age is ill. But Anwana said the ailing girl had been treated by an auxiliary nurse. The CP, Imohimi, directed the commander of Area ‘D ’ Command, Mushin, ACP Akinbayo Olasoji, to carry out an investigation into the prime suspect ’s claims.”