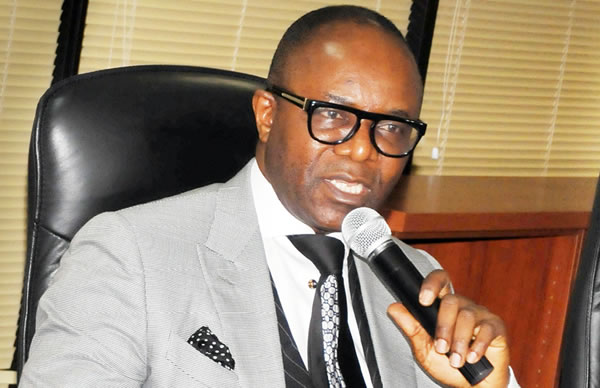 The Minister of State For Petroleum Resources, Ibe Kachikwu, on Thursday said the Nigerian National Petroleum Corporation, NNPC, has incurred a cumulative loss of N85.5 billion in importing petrol and selling at the current retail price of N145 per litre.
Kachikwu said the price was fixed in the first quarter of 2016, when crude oil was selling for $49 and pointed out that with crude price rising to $67 a barrel, the pump price, may no longer be sustainable.
Mr. Kachickwu made the explanation to the National Assembly joint committee on Petroleum Resources ( Downstream).
According to Mr. Kachikwu, the landing cost of PMS which was N133.28 per litre in 2016, is now N171 per litre, which has resulted into stoppage of importation of the product by independent marketers.
This, he said had made the Nigeria National Petroleum Corporation ( NNPC ) to be the 100 per cent importer of the product.
The minister disclosed further that as a result of the N26 difference per litre between the current landing cost of the product ( N171) and pump price of N145, NNPC which had been singularly importing the product at the volume of 25 million litres per day since October last year, has been incurring a daily loss of about N800-N900million, cumulatively reaching N85.5billion today, in just three months.
According to him, already government has mandated him and along with a committee set up to find ways out of the problem which he said requires emergency of about 18 months before the local refineries are expected to be in good shape.
He said three solutions are being considered.
“One , is for the Central bank of Nigeria (CBN) to allow the marketers access forex at the rate of N204 to a dollar as against the official rate of N305 to keep the pump price of fuel per litre at N145.
” Two , to give room for modulated deregulation where NNPC would be allowed to continue selling at N145 per litre in all its mega stations across the country while the independent marketers should be allowed to sell at whatever price is profitable to them in all their outlets.
” Three, to look at the direction of blanket subsidy for all the importers in bridging the gap which would be like going back to a problem that had earlier been solved “, he said .
He, however, stressed that the final solution to the problem was for the nation to put her refineries in good shape in a way that 80 per cent of local consumption of the product should be provided for locally.
In his submission , the Group Managing Director of NNPC, Maikanti Baru, said the just ended fuel scarcity was caused by combination of factors ranging from diversion of the product from depots by tanker drivers to neighbouring countries where it sold between N300 to N400 per litre to outright hoarding of the product by unscrupulous marketers at home.
According to him, the NNPC had prior to the scarcity, had 1.9 billion litres in reserve, which was emptied as a result of panic buying arising from rumour earlier made on social media about price increase, the one day strike action embarked upon by PENGASSAN, hoarding and diversion by some dubious players in the sector .
On his part, Director General of the Department of Petroleum Resources (DPR) Dantani Ladan, revealed that most of the filling stations in the country were found wanting in hoarding and diversion during the scarcity.
He said some of the stations’ personnel who were involved in storing of the petroleum project had been arrested.
While calling on the general public to contact the agency with any useful information on anyone hoarding fuel, he disclosed that the agency had charged individual marketers to comply with Government pump price.
“For now NNPC is the sole distributor, individual marketers can help and one marketer has been charged 127 million for going against the rules.”
In his closing remarks, the Chairman of the joint committee, Kabiru Marafa, said the various submissions made by all the stakeholders would be looked into.
He called for an urgent solution to resolve the wide gap existing between the current landing cost and the pump price .