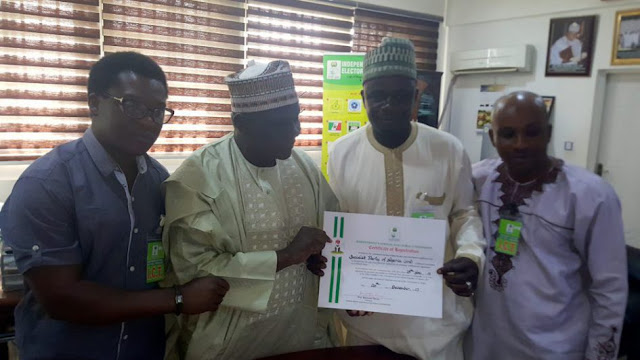 The Independent National Electoral Commission on Monday presented the certificate of registration to Socialist Party of Nigeria, SPN, following a court order.
The certificate was presented to the party’s leaders by Shettima Arfo, INEC’s national commissioner and member of of its Elections and Party Monitoring Department, at the commission’s headquarters in Abuja.
An Abuja Division of the Federal High Court November last year ordered INEC to register SPN as a political party.
This followed a case filed by the party that despite fulfilling statutory conditions, including payment of administration fee of N1 million, INEC refused to register it for not allowing the commission to verify its submitted claims.
SPN accused the commission of failing to process its application within 30 days as stipulated by Section 78 (3 and 4) of the Electoral Act 2010.
After receiving the certificate, the party’s deputy National Chairperson (South-west), Abiodun Bamigboye, told journalists that it was a proof that anything can be achieved through struggle.
He said the SPN was formed to save Nigerians from economic crisis and called on the youth, workers, and students to join and build it into a great party.
“Today is quite historic in the sense that, after four years of tumultuous struggle for the registration of our political party, INEC issued us our certificate of registration as a result of the order from the Federal High Court to INEC on the 28th of November to issue us our certificate of registration within 30 days from the day the judgement was delivered.
“What has happened today clearly demonstrates that a better Nigeria is possible, that a struggle for a socialist transformation of Nigeria is something that is visible and possible if workers, the poor, youth, students can be united for the struggle for a better country,” Mr. Bamigboye said.
When asked of the party’s chances in 2019, he said “the question of taking power in 2019 is not something that is automatic.
“But at the same time, change, I mean revolution of social transformation has no calendar.
“It could even be sooner than 2019, because there is more than enough anger in the society that could even provoke a social transformation of Nigeria even earlier than 2019.”
He said the party would use the 2019 general elections to test its electoral capacity by fielding candidates where it perceives that it has strength.
“Our party is not just an electoral vehicle, it is not a party that will only be active only in the period of election, it is a struggle that will always at all time identify with the struggle of the working people.
“Before or after 2019 general elections, our party will always be there to associate with the cause of the working people,” he said.