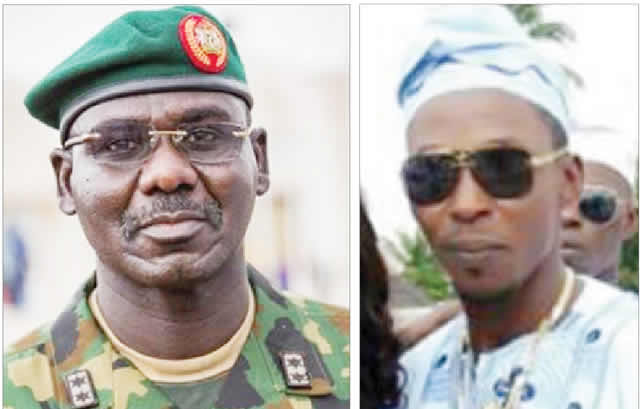 The Nigerian Army on Sunday gave an insight into how a suspected cult member, kidnapper and militant, Prince Johnson Igwedibia, aka Don Waney, was killed in his hideout in a community in Enugu State.
The outgoing General Officer Commanding, 6 Division of the Nigerian Army, Port Harcourt, Maj. Gen. Enobong Udoh, told journalists, while displaying the bodies of Don Waney, his second -in -command, identified as Ikechukwu; and one other suspect, that security agents trailed the hoodlums to Enugu where they met their Waterloo.
Udoh said Don Waney and his gang members had earlier relocated to a community in Imo State before he (Don Waney) decided to rent an apartment in Enugu.
Maintaining that the cult leader was responsible for the killing of 22 persons on the New Year's Day massacre in the Ogba / Egbema / Ndoni Local Government Area, Udoh said the second - in- command to Don Waney led the onslaught against residents who had just observed the New Year ’s Eve service.
The army boss explained that the gang had planned another bloodbath in Omoku before they ( Don Waney and two others ) were killed in their new hideout in Enugu by operatives of the Nigerian Army and the Department of State Services.
“You will recall that in the first hours of the New Year, January 1, 2018, there was mayhem in which 22 innocent residents of Omoku in Rivers State were heartlessly murdered while coming back from the New Year’s Eve service.
“After that, you will also recall that there was a directive from Mr. President that the heartless killers and perpetrators of that mayhem must be hunted down and brought to book.
“This directive was conveyed in a mandate by the Chief of Army Staff , Lt . Gen . Tukur Buratai to the 6 Division to collaborate with the DSS, the police and all other security agencies in Rivers State to hunt down and bring to book the perpetrators of that mayhem.
“They initially hid somewhere in Imo State. We later traced them to Enugu, where he ( Don Waney ) rented an apartment and lived with other people. From there, he and his group were planning another attack on Omoku ,” he said.
Udoh noted that the General Officer Commanding, 82 Division, Enugu, contributed to the success of the operation.
“I want to mention the fact that Don Waney, the leader of the criminal and murderous gang, was the mastermind of that January 1 st ( 2018) massacre in Omoku.
“But that operation was led by Ikechukwu, the second - in- command, who is here. There is another person who I don ’t want to mention that also led that operation. We will not rest until we bring all of them to book ,” he added.
The Rivers State Commissioner of Police, Zaki Ahmed, said security agencies would take the battle to the hideouts of murderous cults and kidnap gangs in the state.
He said, “I want everybody to understand that crime does not pay. You can see a typical example today that the long arm of the law will always catch up with criminals like these. They think they are above the law, but you can see what has happened to them now.
“We are going everywhere and we are taking the battle to their hideouts. We have the profile of these criminals. We know where they are hiding: we will arrest them . ”
The state Director of DSS, Tosin Ajayi, was also at the 6 Division of the Nigerian Army in Port Harcourt.