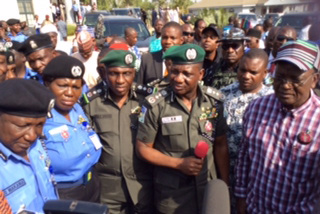 The Inspector General of Police, IGP, Ibrahim Idris, Wednesday apologized to Benue people over the comment he made wherein he referred to the killings in Benue state as a fallout of a “communal crisis.”
Addressing stakeholders of the state in Makurdi, IGP Idris said his statement was misconceived and regrettable and urged Nigerians to learn to be their brothers keeps.
The Police boss tendered the apology after all those who spoke at the gathering lampooned him for the statement he supposedly made shortly after briefing President Muhamnadu Buhari on the Benue killings.
Tendering the apology, the IGP said, “honestly as a persons I want to apologize for the misconception of the statement I made at a press briefing I made in Abuja.
“What I tried to convey in that statement is that we should live together and regard each other as our brothers’ keepers and also ensure peaceful coexistence.
“Irrespective of where you come from, we should be seen as one people who should live in peace and love for one another.
“So in essence my statement should not be seen or regarded as my support for anyone but must be seen to be an advice for the greater unity of our country.
The IGP assured that enough men and materials had been drafted to the state to stop the killings in the state and ensured of the return of peace and order in the state.
Earlier, Governor Samuel Ortom had hinted that over 73 bodies had so been recovered from the crisis zones in Logo and Guma local government areas constituting mainly of women and children.
He lamented that the leadership of Miyetti Allah Kautal Hore were still working the streets free despite masterminding the invasion and killings in the state.
He added that “If police man can be killed just like that and there weapons taken away by these people in Logo, where are we going to in this country. IGP that is a major challenge for you, I know that your weapons cannot be taken away just like that we expect that the you must go after this people.”
“Even in my council ward, Nzorov in Guma they attacked again but the soldiers repelled them.
“I must state that Nigeria is passing through serious security challenges, I pray we don’t get to the level that our people resort to self defence. Because when people are not sanctioned for their lawlessness, anarchy and confusion would set in and nobody will be safe.
“The grazing law we made in Benue state is for the collective interest of all, irrespective of where you come from and it has come to stay.”
The Governor also announced the donation of five pick up vans to the Police for the purpose of the operation to end the killings promising to avail security agencies all needed support to end the killings in the state.