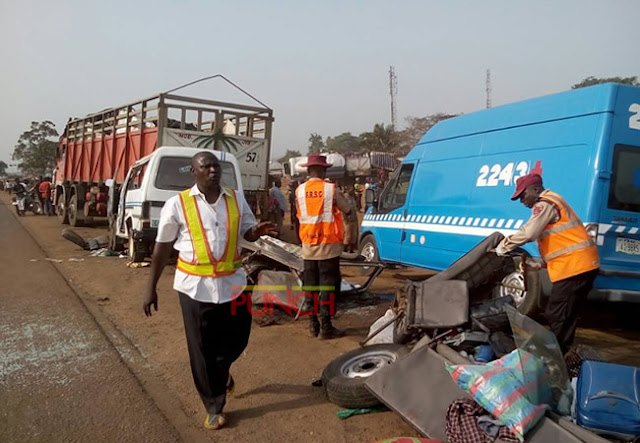 The Federal Road Safety Corps has said that five persons died and 13 others injured in an accident that occurred on the Lagos - Ibadan expressway on Sunday.
Ogun Sector Commander of FRSC, Mr. Clement Oladele, told the News Agency of Nigeria in an interview in Ota, Ogun state, that the accident occurred at Wazobia, at about 9 .00 a .m .
Oladele said two vehicles and 18 persons were involved in the accident that resulted in the death of five persons, while 13 others sustained various degrees of injuries.
The sector commander explained that a commercial bus with registration number MGD 129 ZF coming from Ibadan to Lagos lost control and veered off the road and collided with a trailer with registration number DDA 121 XA that was parked by the road side.
“The corpses of the victims had been deposited at the mortuary in Ipara General Hospital, while the survivors are also receiving treatment at Sagamu and Victory Hospital , Ogere ,’’ he said.
Oladele said the driver of the commercial bus absconded immediately after the accident occurred.