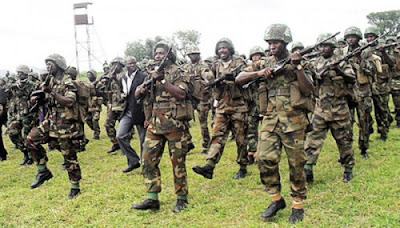 The Nigerian Army on Tuesday in Abuja dismissed four soldiers accused of rape, extortion and assault.

The soldiers include one corporal and three privates, who were attached to the Guards Brigade, an arm of the Nigerian Army, Abuja.

The Guards Brigade, which has three battalions  (7, 176 and 177), is a special unit of the military that oversees the security of the President and Aso Rock. President Goodluck Jonathan lives in Aso Rock.

Brig-Gen Emmanuel Atewe, the Commander of the Brigade, said the soldiers were said to have abducted and raped some women at a garden in Wuse Zone 2, Abuja.

The commander, who was represented by Maj. Peter Elayo, said the Federal Radio Corporation (FRCN) reported the incident on Jan 14.

Mr. Atewe said that the report made the brigade to institute a Board of Inquiry to investigate the circumstance surrounding the allegation with a view to taking punitive action to prevent future reoccurrence.

“The board whose report has already been submitted was able to establish that the four soldiers, during the period, abandoned their duty post to an unauthorized destination.
“The investigation led to their trial and they were found guilty of misdemeanor and abandoning their location where they were officially deployed, thereby compromising security.
“The soldiers have subsequently been dismissed from service in line with service discipline,’’ Mr. Atewe said.