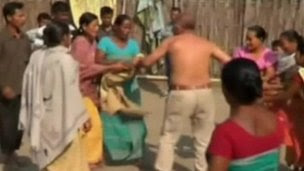 The ruling Congress party in India's Assam state has suspended a politician accused of rape after he was set upon and beaten by crowds in a village.

BBC reports that Bikram Singh Brahma was arrested on Thursday after the victim's husband reported the alleged rape.

National TV showed footage of the politician being stripped of his shirt and slapped by women.


Chief Minister Tarun Gogoi said his action was "condemnable" and he should be punished.
Pressure has grown for tougher action on rape since a woman was attacked in Delhi on 16 December and later died.

Five men have been charged with the kidnap, gang-rape and murder of the 23-year-old, whose name has not been released.

The government has set up a committee under a retired Supreme Court judge to recommend changes to the law on rape.


Mr Brahma was beaten and accused by villagers in Chirang district, on the border with Bhutan.

Police said a man reported that his wife had been raped during the night by Mr Brahma.
The politician allegedly entered the woman's house and raped her at about 02:00 (20:30 GMT Wednesday), according to a police official.